If you are planning to start a blog then you should carefully select the hosting company.

Because Hosting can make or break your site.

These are the few most important thing which you should check before purchasing hosting for your site:

SiteGround increased its price from $3.95 to $6.99. That's why it's not affordable for many bloggers. So, I'll recommend you to check my Best SiteGround Hosting Alternatives list article.

In this article, I'm going to compare SiteGround and Bluehost on the basis of above mentioned factors.

So, why are we waiting?

I'm going to start this comparison with lots of proofs. So, must read till end.

I saw many bloggers are promoting Bluehost on their blog these days.

Let's see the popularity of these two hosting companies in Google Trend.

After seeing the above screenshot, If you are thinking that Bluehost is the best hosting because it has more popularity than SiteGround.

Then you are wrong. Read this article to know the reason.

I'm not saying that Bluehost is worst hosting company.

But their customers are not as happy.

Check Screenshots which I've shared in this article to know more.

As you can see in the below image, SiteGround got 88+ votes and  got only 7 votes. 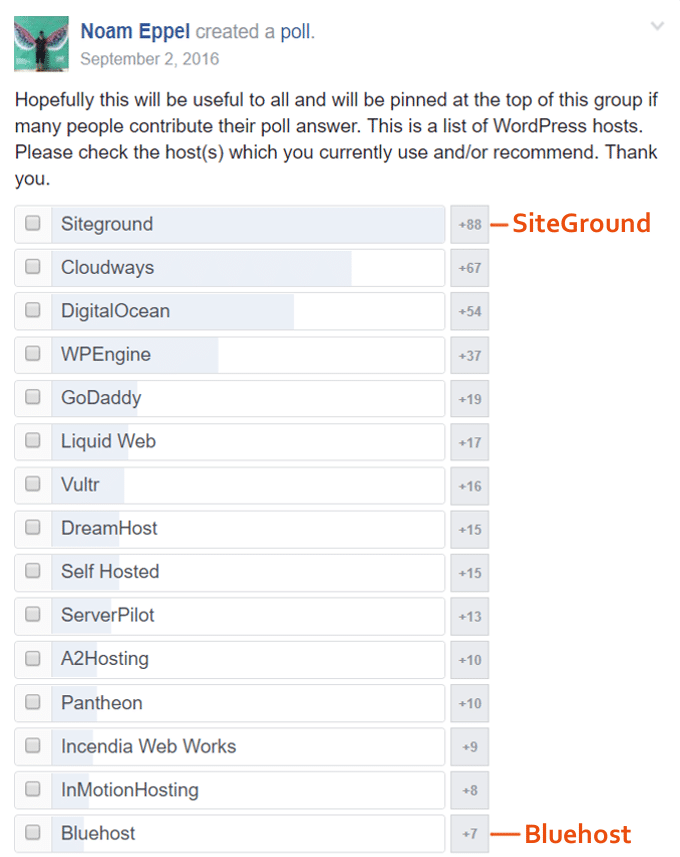 As you can see in the below image, SiteGround got 77 votes and Bluehost got only 2 votes

If you still confused then let's see a Facebook Thread result.

Ken asked a question related to hosting company in "WordPress Help for Beginners" group and check what people replied. 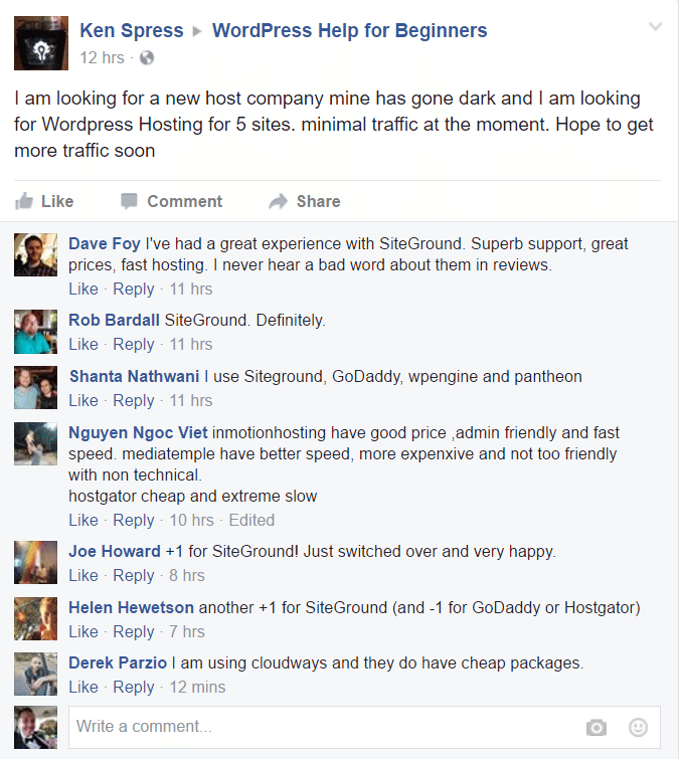 Mahir asked in a Facebook Group that which is the best hosting comany?

And again people recommend him to use SiteGround Hosting.

2. Support of Bluehost and SiteGround

you must research about the support of the hosting company which you are going to purchase.

Because sooner or later you may face some problems in your website then in that case if support of the hosting company is not good then it may break your site.

That's why I'm going to share some screenshots of the support of both the hosting company.

As you can see in the below screenshot Bluehost users are not happy with it's support.

Let's see what Bluehost users are saying on Twitter.

This is the major reason why Bluehost users are migrating to SiteGround these days.

Now Let's talk about the Customer Support of SiteGround.

They are famous for their lightning fast support. 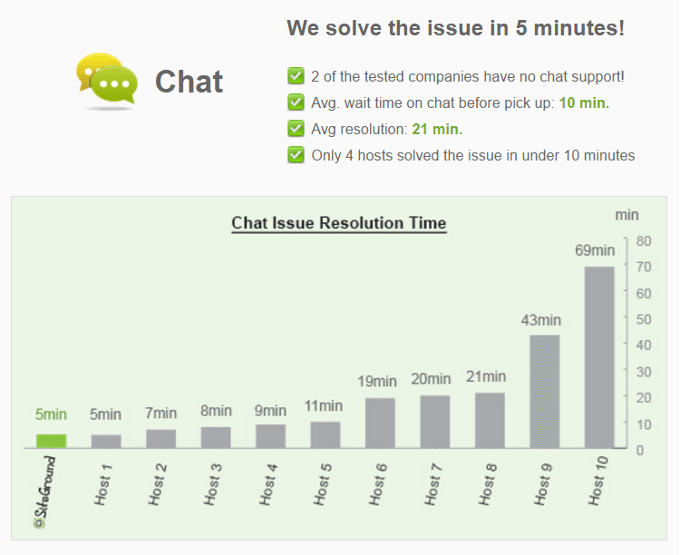 SiteGround Customers love them due to super fast customer support.

If you don't believe me then see the below screenshots.

WINNER of this Support Competition:

If you are planning to purchase hosting for your website then you must research about the speed of website hosted by that hosting company.

Because Site Speed is one of the main Google ranking factor.

If your site Load time is too long then it's approximately impossible to get Google 1st page ranking.

Don't worry! Because I'm going to tell you which provides fasted SiteGround speed.

Check the screenshots which I've shared below.

If you are planning to purchase Bluehost Hosting then think again.

Because many of its customers are facing Site Load time problem.

Let's see the screenshot which I've shared below to know what Bluehost customers are saying about speed on Twitter.

Now If we talked about Site Speed of SiteGround hosted sites. 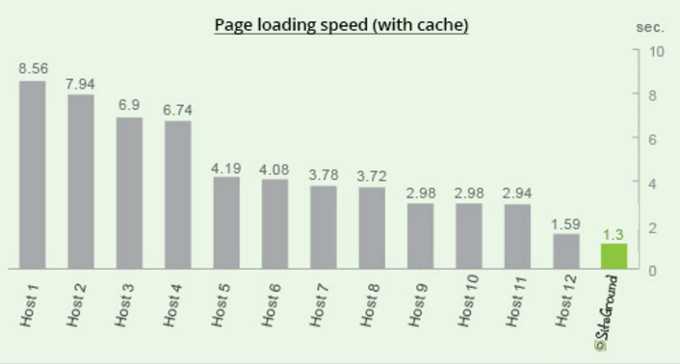 Check the below screenshots which I've collected from Twitter.

SiteGround users are very happy with their site speed.

4. Downtime of SiteGround and Bluehost

Suppose users visits on your site and they get the message that your site is down.

Then in that case you know what'll happen.

They'll immediately click on back button and may never visits on your site.

So, I highly recommend you to select the hosting which has good uptime history.

Bluehost Hosted Site are Always Down

But it's not true.

But If you are using SiteGround then you must knew that SiteGround really provides 99.99% uptime.

When I research on Twitter about SiteGround Uptime then I could not find even a single negative feedback.

See this Uptime report of SiteGround. 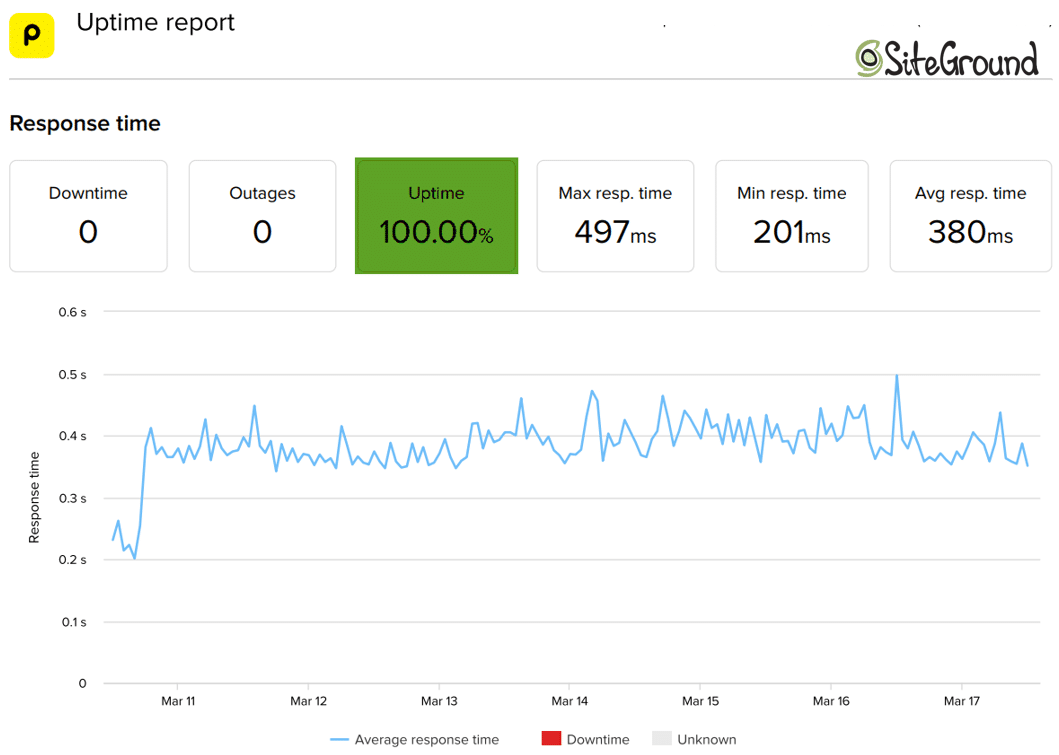 WINNER of this Uptime Competition:

WARNING: Bluehost is owned by an EIG company

Don't Waste your hard earned money on an EIG Company.

Because they are famous for cutting the costs by downgrading their hardware. It means you'll not get good service.

These are the top hosting companies which are owned by EIG Company: 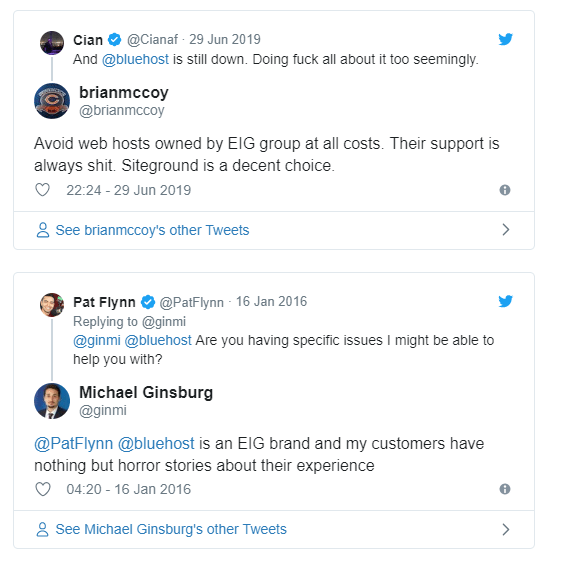 Check the below screenshot to see the complete list of companies which are owned by EIG company.

So, check this list of EIG company and Don't waste your money on EIG Company. 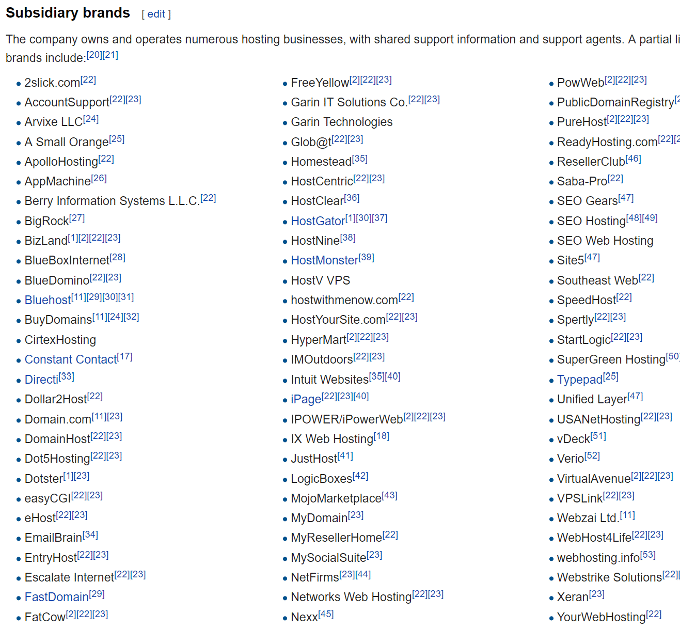 SiteGround is the Winner

​I have shared all the screenshots to show you why SiteGround is rated #1 hosting.

Not only me but also thousands of people on social media said that SiteGround is Best Hosting company and Bluehost is worst.

If you are planning to start a blog with SiteGround or Want to migrate to SiteGround then I have a good news for you.

You can use this SiteGround 60% Discount Link to save your money.

​I have Compared SiteGround and Bluehost WordPress Hosting with lots of screenshots.

I went to various social media to find real SiteGround and Bluehost users.

And checked what they said about these hosting company.

Then I made screenshots of it to make this article helpful.

So that anyone who wants to start his/her blog can easily decide which is the best hosting company.

If you have any doubt then please let me know via comment below. I'll reply as soon as possible.

​I hope now you don't have any doubt related to SiteGround vs Bluehost WordPress Hosting Review.

Because SiteGround is #1 hosting company.

Use this SiteGround 60% Discount Link to save your money when you purchase hosting.

Connect With Us on Social Media

Note: we have Approx. 14K Members on Facebook Group​

679 Shares
Disclosure: This post may contain affiliate links, meaning that if you click on one of the links and purchase an item, we may receive a commission (at no additional cost to you). All opinions are our own and we do not accept payments for positive reviews.

If you are planning to purchase hosting, theme, plugin or anything then you can contact me.

If you'll purchase it using my affiliate link then I can give you some amazing bonus.

PROCEDURE: Send an email at sumit@blogginglift.com with subject line "I want to purchase product_name" and I'll tell you what bonus you'll get from me. 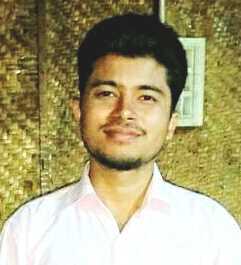 I’m the Founder of Blogginglift.com. After 3 Unsuccessful blogs, Finally I started this successful blog. Click on below button to read my full story 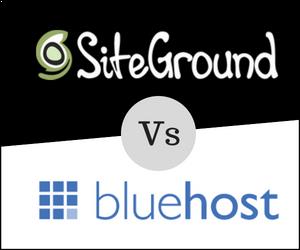 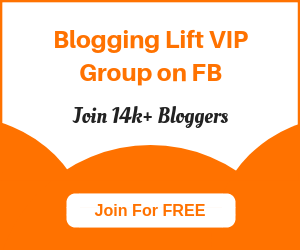 Scroll back to top

Get Course Worth $99 for FREE. It's a Limited time offer. Grab it asap.

​Grab this 60% discount link to save your money when you purchase hosting from SiteGround.